Atomic Aquatics make regulators, computers, fins, and more. Atomic is a company known for being fully committed to keeping divers safe, comfortable, and decked out in the finest gear. Atomic even invented and debuted the first titanium regulator in 1997, one of many technical innovations they’ve championed.

Atomic Aquatics was founded in Huntington Beach in 1992 by Dean Garraffa and Doug Toth with the philosophy of innovation, excellence, and superior materials. Atomic is world-renowned for being some of the highest calibre scuba gear in the world, a result of their commitment to new technology and quality construction. Their gear has been used by Hollywood actors like Kevin Costner and Edward Norton, and Atomic equipment was even used by magician David Blaine during his stunt to stay underwater for an entire week!

Atomic is known for its regulators, many of which are not only lightweight, sturdy, and safe but are completely 100% corrosion resistant because of their titanium construction. Atomic masks provide thrilling panoramic views, and are designed for maximum comfort over long dives.

Atomic dive computers put all of your pertinent dive information like depth, direction, and air pressure on a bright and clear OLED screen.

Atomic snorkels have standard or semi-dry tops, which guard against water splashing into the breathing tube.

Atomic knives are made out of sharp, durable, and corrosion-resistant titanium, while Atomic bags will always ensure that you have a resilient way to carry all of your gear.

If you’re looking for the best, look no further than Atomic 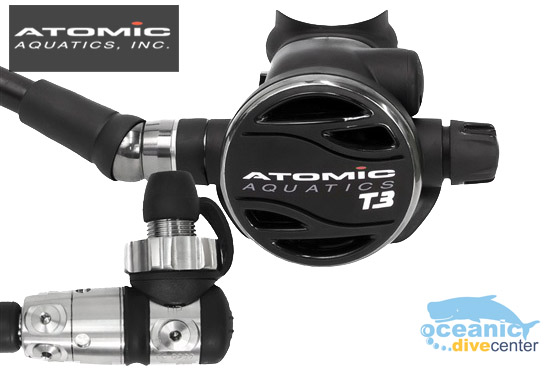 The Atomic T3 extends the impressive two year service period to a unheard of three year or 300 dive interval and the regulators are even covered by a lifetime warranty. The use of such high grade materials and some clever patents such as the 'Seat saving orifice' all helps to extend the period between service centre visits without affecting the extremely high reliability and performance.

The design changes from the previous T2 models have been scrutinised to shave off as much weight as possible to make the regulators one of the lightest full size, high performance regulators available. The A-Clamp frame in particular has seen huge weight reductions and is no longer a hindrance for travelling divers compared to DIN valves. The first and stage components are precisely machined from solid titanium billet. Even the comfort swivel is made of lightweight titanium rather than coated brass or steel.

Unlike most regulators which have a manually adjustable venturi lever the T3 regulator is fitted with 'automatic flow control' (AFC) which automatically controls the flow of air inside the second stage housing, subtly adjusting the performance as the diver descends and ascends to provide the perfect balance between performance and reliability.

The Atomic T3 is supplied in a deluxe padded regulator bag and is compatible with nitrox mixes up to 40%. 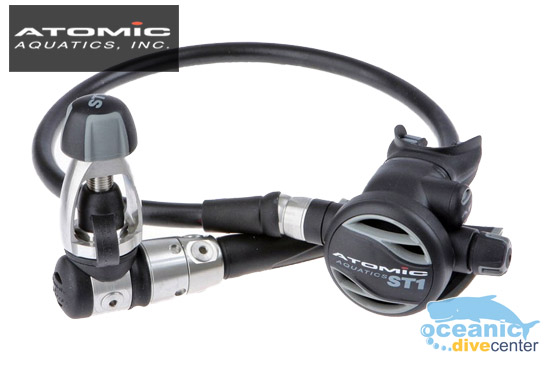 The Atomic ST1 Regulator is a high quality beautifully crafted regulator that delivers outstanding performance and looks great. The 5 ported swivel turret 1st stage is machined from a unique 316 stainless steel, unlike conventional brass 1st stages, which performs better and is kinder to the environment.

Our Other Manufacturer Ranges